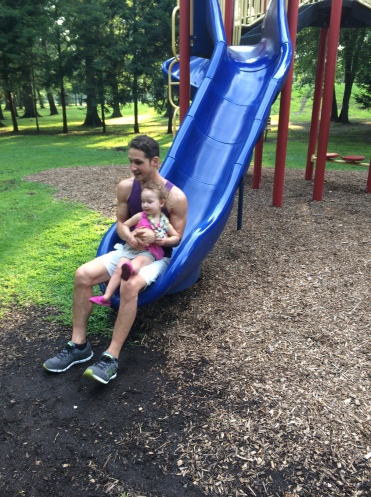 Sometimes my daughter gets scared to go down the slide.  She climbs all the way to the top, looks down and suddenly starts her descent down the stairs.  “Let’s go together,” she’ll say, and one of always obliges.

When we get back up to the top, she’ll look down and then up at my face.  “Let mama go with me.”  She’ll start climbing on my lap, and squeal with glee as we make our way down the slide.

What’s scary and seems unsafe suddenly doesn’t seem as bad when plopped on her mama’s lap.

And so it is with us sometimes and our Heavenly Father.

I love this quote from Perry Noble’s book, Overwhelmed:

Well-intentioned people all too often try to reduce Christianity to little sayings and formulas that are absoutely ridiculous.  Most of the “Christian” bumper stickers out there are pretty off base.  The one that bothers me most, however, is the one that says, “The safest place to be is in the will of God.”

Doesn’t that sound so beautiful?

God’s will is good, but it’s anything but safe.

Daniel was thrown into the lion’s den– ultimately an extremely dangerous place to be!  But God.  BUT GOD!!!  But God closed those lion’s mouths and revealed His glory, His power, His purpose.

Shadrach, Meshach and Abednego were thrown into a blazing FIRE so hot it killed the men throwing them in!  I’d say that’s slightly unsafe. 😉 But God shows up again, literally in the fire with them, and His purpose prevails as always like He says it will.

Job lost everything.  EVERYTHING.  His house, his job, his family, his health.  But God again shows up and blesses him even more in the second half of his life than in the first.

Don’t even get me started with the Israelites and Moses…  Stuck between the Red Sea and Pharaoh’s vast army?  NOT SAFE!  Death seemed imminent!   But God swoops in with his ever abounding love and performs an incredible miracle in their lives.

Pretty much we can expect to experience trials of many kinds.  James 1:2-4 says: “Count it all joy, my brothers, when you meet trials of various kinds, for you know that the testing of your faith produces steadfastness. 4 And let steadfastness have its full effect, that you may be perfect and complete, lacking in nothing.”

On one side, we can be sure that the life God calls us to is anything but mediocre, boring, or even safe.  Yet on the other side of the coin, we know that the same God does not sleep in his watching over us (Psalm 121).  Ultimately, everything that has been committed to Him truly is safe because it is under His control and His perfect purpose.

What’s hard for me to grasp is that the God who did these amazing things in the bible is the same God working in my life, too.

He is the same God in that fiery furnace, in the lion’s den, at the red sea…  If He did it for them, He can surely do it for me, amen?!  Even so, I have to be in a place where– with reckless abandon– I trust and give and allow God to come in and do His miracle.

Had Shadrach, Meshach and Abednego caved and obeyed the king, God never would have had the same opportunity to walk with them in a blazing fire.  Had the Israelites not trusted God to lead them out of Egypt, they never would have seen the parting of the red sea!  Had Job followed his wife’s advice and just killed himself after all his “bad luck,” God never would have been able to bless him so much more in the second half of his life than the first.  We’ve got to get to a place where we give Him a chance to do His miracle.

Just as my little girl fears the slide at times, knowing she is with her parent gives her the courage to take that plunge and experience something so wonderful.

Yes, I’d agree with Perry Noble on this one. 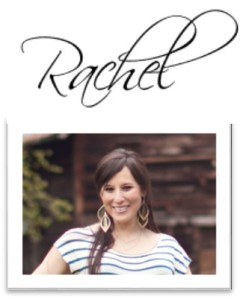 But a man of God came to him (Amaziah) and said, “Your Majesty, do not hire troops from Israel, for the Lord is not with Israel.  He will not help those people of Ephraim!  If you let them go with your troops into battle, you will be defeated by the enemy no matter how well you fight.  God will overthrow you, for he has the power to help you or to trip you up.”

Amaziah asked the man of God, “But what about all that silver I paid to hire the army of Israel?”

The man of God replied, “The Lord is able to give you much more than this!”

Today, lets take a breath and a step back.

Deep in the throws of fighting, it’s easy to get caught up.  Whatever it is you’re fighting, I’m sure it is a good cause.  Amaziah’s was too.  It’s so easy to keep plodding full steam ahead with tunnel vision towards the goal in mind.  Let’s stop for a moment and consider…

Our ideas may be honorable, noble, bold even.

Psalm 127:1 reads, “Unless the Lord builds the house, those who build it labor in vain” (ESV).  Oh how I do not want to labor in vain!

The goal may be very worthy.  The end result may even be what God’s calling and leading us towards!  But are we missing out on much more because we’re so set on our way of getting there?

Amaziah was worried about 7,500 pounds of silver he paid to hire 100,000 experienced fighting men from Israel.  I have no idea how much money that is, but I’m guessing that since he was king and he stopped long enough to consider it, it must have been a significant amount.  Even if it wasn’t, though, the amount really isn’t the issue.  The issue is that he’s going about his business as king, doing what he thinks is appropriate to conquer those pesky Edomites, and he’s halted in his tracks by a man of God who provides Godly wisdom, truth and reminds him…

He’s worried about silver?  God can do much more.

We’re worried about what– money?  Marriage?  Jobs?  Babies?  Graduation? Health?  We may have great ideas!  We may be executing those ideas well!  Yet if we see God pulling us in a different direction, we must remember!

I am learning this right now, trusting that God is working behind the scenes; learning that although my ideas may be good, God may have something else in mind– something much more.

It is crazy how a little paragraph in the huge bible about a man named Amaziah can suddenly stop me in my tracks, realign my thought process and cause me to take a big breath and a step back.  Oh Lord, may I give you room to do much more. 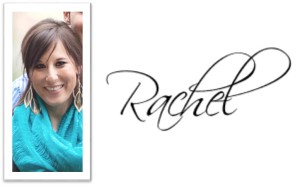 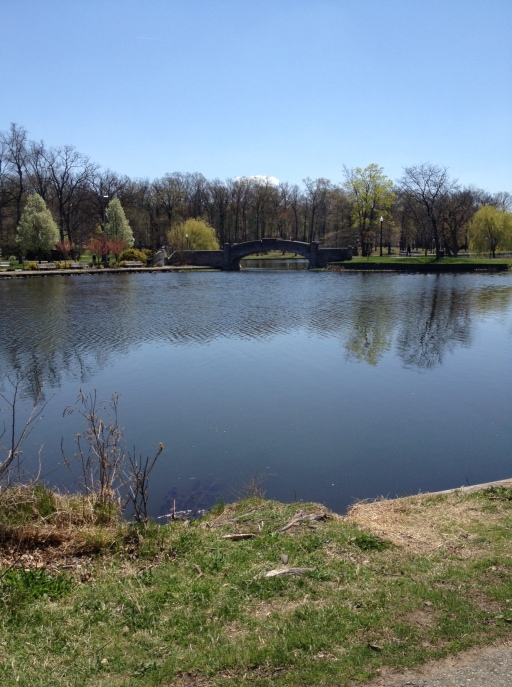 One of our favorite nearby parks.

The past couple of weeks have been odd.

We had a difficult conversation with someone we love very much.  There were tears and emotions were high, as passions and convictions collided.  The very next day, the same conversation with a different person.  Oh Lord why can’t we just smile and nod?!  Why must we talk about the uncomfortable?

A week later, sobering news about someone we love dearly.  The same day, shocking news about another loved one.  And then the news that’s not really news at all– unchanging conditions of yet another deeply loved one who’s sick.  We wait.  We pray. 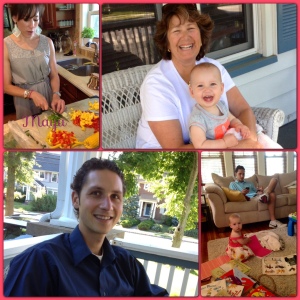 There were joys, though, too.  Pizza from one of the area’s most renowned pizzerias.  A visit from Grandma and Bev!  Weather that calls for a crisp, cold glass of chardonnay.  Summer salads.  Cold water.  Date night (albeit at home) with my man.  A sermon that lifts up my husband who’s had a weary couple days.  Dinner with new friends!  Walks around the park.  Life group with new friends who edify and sincerely ask and pray and share food and genuinely welcome.

The best chocolate chip cookies I’ve ever tasted (I promise, I will give you the recipe.  Soon.  I feel like I’m holding out on the world by hoarding this recipe to myself.  It is literally the best recipe on earth!).  And finally… My mama comes to visit today!  Hallelujah! 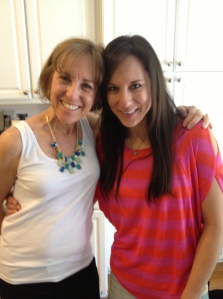 A girl always needs her mama!

How can we reconcile the sobering news and difficult conversations with the beauty of summer’s bounty, new friends, and the sweetness of chocolate chip cookies? 🙂  It would seem every fiber in my being would say evil is at work in the bad, and God is at work in the good.  Perhaps it is that way.  Or maybe I have yet to fully understand.

All things serve Him.

Isn’t this what Urban Hallelujah is all about?!  All things serve Him.  All the time.  Every day.  In every circumstance.  For His glory, His purpose, His praise.  The good and the bad, the ugly and the beautiful– all of it transcends us and can reveal Him.

A breakup can birth new life.

A difficult conversation can cultivate truth.

Surprising news can breed a multitude of blessings.

Family visits, warm friendships and yummy food can build  a spirit of thanksgiving.

Great is the Lord and most worthy of praise; his greatness no one can fathom. ~Psalm 145:3

I cannot fathom His greatness.  I have yet to understand!  I must hold fast to the truth that all things serve Him.  Even the unthinkable can bring Him glory.  His greatness is beyond my comprehension, but I can know with certainty because his word declares that all. things. serve. HIM.  For greatness that no one can fathom here on earth, but for greatness nonetheless.

Holding fast to these truths this morning.  Thanks for reading!

***The following song has ministered to my heart recently.  I hope it speaks to you too!